This weekend I arranged for The Husband and myself to bog off alone to Cheltenham and watch a play. Having not had a night away by ourselves for two years (when we went somewhat further afield to London to watch The Crucible at the Old Vic, this was a real treat. Kids and dog dispatched to my Mum and Dad, we headed an hour up the motorway to a decent hotel and a night of drama.

It had been a spur of the moment decision; I was gutted to find out that I’d missed A Judgement in Stone, which was adapted for the stage by Bill Kenwright from the original novel by Ruth Rendell, when it visited the Weston Playhouse a few weeks back. To be absolutely honest, it wasn’t the play I was disappointed about, as at that stage I didn’t know anything about the story or the production. It was because I’d missed  the chance to see one of my favourite actors, the utterly amazing Sophie Ward, onstage. After I posted this on twitter, she tweeted me back to let me know about the Cheltenham dates, and I booked tickets the next day. The Hotel du Vin followed (ouch, in terms of my bank balance, but worth it for the experience!) and we were all set. 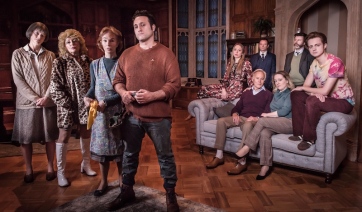 The play itself was really elegantly produced and performed; it’s essentially one set, which moves backwards and forwards in time between the time before the tragic event that the play investigates, and its aftermath. In this vein, it reminded me very much of Priestley’s An Inspector Calls. The choreography was extremely clever in creating this effect of a time slip – actors move seamlessly on and offstage through the exits while others are coming on, and there are lighting shifts to indicate the past and the present. A classic Rendell character study, this play is not so much a whodunnit as a psychological drama, exploring issues of class, privilege and attitude around the central tragic event of a multiple homicide.

The play, while essentially an ensemble piece, had some standout performances. The brilliant interplay between Debora Grant and Sophie Ward as Joan Smith and Eunice Parchman has light and darkness, and sets up the darker events of the play wonderfully. Anthony Costa as Meadows the gardener is, at times, channeling Mellors the gamekeeper from Lady Chatterly, but gives the role both humour and depth. When he loses his temper in the third act, he is convincingly threatening but equally portrays the devastation of a man whose liberty is at great risk. The four members of the Coverdale family are convincing as a blended family, with the older generation’s chemistry wonderfully played, and the younger step siblings having that slightly uncomfortable relationship that, deliberately underplayed, feels raw at the edges in the best possible way.  The two detectives who are investigating the murders of the Coverdale family give expositional clout, and although sometimes there were moments where it’s difficult to recall just how much they know at any given time because of the slickness of the flashbacks, they keep the pace moving and ask the questions the audience needs to ask. The Coverdales’ dotty cleaner is the village’s voice, filling in the gaps in the narrative, and played with the lightest of touches by Shelley Anne Field.

The role of Eunice Parchmann, dour housekeeper with a dark secret, was taken by Sophie Ward. Eunice is the one constant onstage; the bridge between past and present, and as such, hers is a physically and emotionally demanding role. There are very few moments when Eunice isn’t there; she’s in the background during the family’s interactions, as well as taking centre stage with her own place in the timeline. Physically, she moves a lot; always carrying something, cleaning, walking from one ‘room’ to the other, and that’s before you get to the set pieces (clearing up after the murder, an echo of an earlier moment when she’s picking up the sweets scattered by Joan at the end of the first half, to name a couple). For many reasons, Eunice is the lynchpin of the drama.

And I have to say, Sophie Ward nailed it. I read the book during the week, as I wanted to know the story before seeing the play, and Sophie’s portrayal of Eunice was fantastic. From the physical awkwardness and gangliness of the character (aided by the fact that Sophie is model-tall), the fish-out-of-waterness at being in ‘the big house’, the stilted, often comical verbal interactions with the other characters, the separateness of a woman who has slipped through society’s net on so many levels…I could go on. I’ve always known Sophie Ward was an amazing actor, but it was a sheer pleasure to see her onstage in a role like this. Eunice is a woman who is old before her time; a throwback to a bygone era of service with a darkness in her; I felt simultaneously Eunice’s depths (she, as a character, has an instinctive cunning that is belied by the surface guilelessness), and also her insecurities.

After screwing my courage to the sticking place and belting around to the Stage Door of the Old Vic to get Richard Armitage’s autograph after The Crucible, I was plucking up the courage to do the same when the curtain came down in Cheltenham. There were a few people there – some to see Anthony Costa and Deborah Grant, and as they left, I was lucky enough to see Sophie and her wife Rena coming down the steps to the stage door. Knees trembling (I’ve been a fan of Sophie’s since I saw That Film back in 1987, and several of her roles have stayed with me as I’ve got older; A Dark Adapted Eye springs to mind, as does A Village Affair and Wuthering Heights…I could go on!), and her strength, grace and eloquence, especially in the face of such inevitable media scrutiny as an actor, have made her such a role model. As I stammered out a few congratulations, she shook my hand and thanked me for coming, and then, hoping it would be all right and not too cheeky, I asked if it was OK to take a photo. Rena very kindly snapped a couple, and then we said our goodbyes. It was so lovely to meet her, and she and Rena were very kind to indulge me and have a chat – I wish her and the cast a wonderful rest of the run (the play is up and down the country until November, if you fancy seeing it). It was a great night, and it meant so much to finally meet someone who, in a sense, I’ve grown up with. They say you should never meet your heroes…well, on this occasion, I’m so glad I did!