Half term, before my own children, used to be a blissful time of lie ins, catching up with household things, time spent with The Husband, a bit of holiday homework and a lot of chilling out on the settee. How things change with the arrival of your own sprogs! Now, half terms tend to be spent juggling the housework with entertaining small people, one or two good days out or fun things, and trying to remember where the hell the older one’s PE kit went while keeping the younger one from raking out every single cupboard in the house. And that’s before the dog comes in and spreads mud everywhere…

However, there is still time for a little bit of quiet and grown up-ness, Grandparents and Zen willing. I managed to get out a couple of times on my own with The Hound, and we discovered a new walk, which The Husband has promptly hijacked. Basically running over the four or so fields between our house and the woodlands, it’s a rather pretty route. 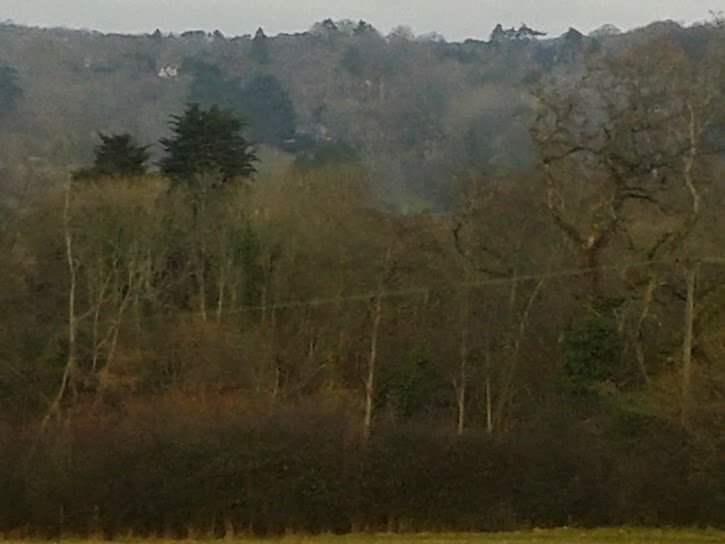 My girls, Bertie the Weimaraner and Me at the top of the hill!

The writing’s been a little bit on the backburner lately, as I wait to see the outcome of a couple of submissions, but the ideas are still there, smouldering away (smouldering being the active verb when it’s Jonathan Carter I’m thinking about!). Whenever I hear a song that reminds me of my characters or the village, I’m filing away those ideas, ready to pick them up when the mood strikes. The latest one to strike me is Seth Lakeman and Lucie Jones’ Ballad of Midsomer County. As with so many of my choices, it’s not so much about the lyrics but the feel of the song, and since I’ve often considered Far From the Tree to be Midsomer Murders without the body count, it fits really well. 🙂

I’ve also been procrastinating and making Far From the Tree related fanart in Photoshop. Here’s the one I’ve finished…there are a couple more in the works :). The premise behind this one is that Richard Armitage is being interviewed about the (fictional) screen adaptation of my (real) novel, as he would be an excellent choice to play the role of Matthew Carter.

Spoof GQ cover, imagining that Richard Armitage took on the role of Matthew Carter in the screen adaptation of ‘Far From the Tree’. Main image used without permission, credited to Leslie Hassler.

I think this counts as the first piece of Far From the Tree fanart ;).

We also managed an epic night out with some friends. There’s nothing like a group of parents of young children for being able to party! The night was a James Bond theme night, and while the aftermath was one of the worst hangovers I’ve had in a decade, the evening was well worth it :).

The ‘before’ picture. The morning after was slightly less civilised!

Oh, and finally for this mish mash of a post, I received my runner’s up prize from Accent Press for their new writers competition :). I look forward to getting stuck into these, and thanks again to Accent for placing me :).