I was fortunate enough to visit Tyntesfield, which is on the outskirts of Bristol, six or seven years ago when the National Trust had just acquired it. Back then it was a work in progress; it was surrounded by the largest freestanding scaffolding in Europe while the roof was repaired, and it was in what could charitably be called a state of genteel decay.

Seven or so years on, the restoration of the house has been mostly completed, the gardens and grounds have been landscaped and the National Trust has developed a great deal of the site to be both child friendly and non-patronising. The Husband and I took the girls for a wander around, having visited the Sawmill on site at the weekend, and promptly gone home and bought annual family membership. It’s worth buying annual membership, as not only does it give you access to hundreds of beautiful houses and grounds across the UK, but it really is a money saver. I’d never accuse the National Trust of money grabbing, but annual membership cost £78 for the four of us, whereas it would have cost us £37 on the door for today’s visit alone.

Now, the thing you need to know about Tyntesfield is that it is unusual looking…to say the least. The original house was built around 1832, and then it was sold to a merchant named William Gibbs in the 1870s. He was, it would appear, the Del Boy of his age, making money out of, among other things, guano (seagull poo). And, oh, boy, can you tell! The exterior of the house at Tyntesfield is  like someone has put a collage together of all of their favourite bits from other houses, added some extra wax crayon drawings, handed it to a blind architect and said ‘I want one like that!’. Very much in the style of Gothic Revival, there are turrets, spires, a chapel on the end…the list is endless. But, in some crazy,  zany way, it absolutely works.To be frank, I’m still undecided about some of the features of the interior (the fireplace in the games room has a rather flamboyant billiard ball motif that is pure Derek Trotter), but the glorious views from the bedroom windows more than make up for it. And if you’re making £100,000 a year in the late 19th Century, then, frankly, you can do what you like… The site itself is really geared up for families; everywhere you go in the grounds there are well placed activities for children. At lunchtime we had our picnic on the old boating lake, where there were very handily placed wooden ‘boats’ with seats that were perfect for our picnic. There’s the tennis court, complete with two different sizes of net, and racquets and balls in racks to be used freely by visitors, and a custom built play area next to the Orangery and Kitchen Garden. The site has plenty of walks and all are buggy/wheelchair friendly, which makes a huge difference with a toddler in tow! 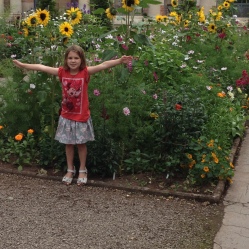 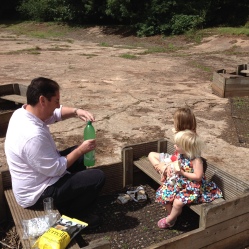 So we’ll definitely be visiting this crazy, beautiful house and gardens again over the summer, and if you’re over North Somerset way, I can’t recommend it enough!