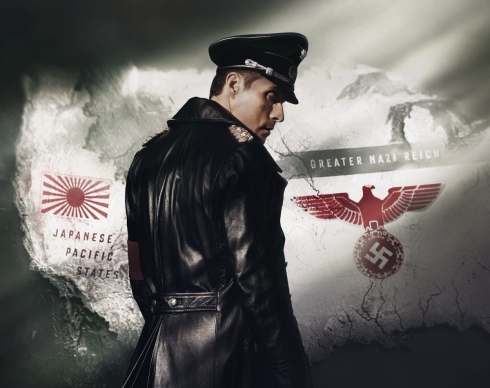 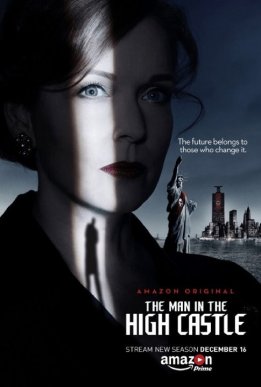 I’ve written a piece for the April 2017 edition of Media Magazine about the representation of the alt-Reich in The Man in the High Castle, and it touches upon how the Nazis are presented in the series. In this blog post, however, I wanted to explore something a little different, which is the presentation of what has rapidly become my  OTP (One True Pairing, for the non-fanfic readers) for the show. I am, after all, a writer of romantic fiction, so it’s to be expected I’ll look for the pairing in anything.

I’ll admit, The Man in the High Castle isn’t exactly a romance fest. It’s an ensemble piece, based on the premise from a Philip K Dick novel that the Japanese and the Germans won World War 2 and then divided up the globe accordingly. America has been split down the middle, with the Reich colonising the East Coast and the Japanese the West. There’s a strip in the centre called the Neutral Zone, which is a bit like the Old West. Various characters on either side of the divide struggle to find their place in the world, while the Fuhrer and the Japanese Imperial Family wage a cold war.

So far, so Dystopian, right? Except that, this being Philip K Dick, there’s a curve ball about parallel realities chucked in, and characters who discover that they can mentally migrate between them. And that’s before we get to the video tapes that the Man himself collects, that show these alternate realities in the most chilling detail.

But, as usual, it’s a couple who have caught my attention the most in this show. From the outset, we are introduced to Obergrupenfuhrer John Smith, who is the highest ranking Nazi on the East Coast. Make no mistake about Smith; he is ruthless, calculating and has no problem with chucking traitors to the Reich off the top of tall buildings. From the peak of his cap to the toes of his perfectly shiny boots, he lives, breathes and kills for the Reich. However, if he was that two-dimensional, the audience would switch off straight away, and it’s no surprise that the flip side of Smith’s life is rather different.

Since scene-by-scene analysis is something I really love, let’s look at some of the key moments here. The beautiful visual metaphor of Helen hiding John’s pistol in her apron before she realises it’s him coming home is perfect shorthand for the world of Reich America. The ideology of the society is horrific, but the veneer is rigid respectability. Eugenics, eliminations, insitutionalised prejudice and legal homicide; all are acceptable in the name of furthering the Reich. And yet this is wrapped in the trappings of what we would recognise as the American Dream; the family, the suburbs, a nine-to-five job (even if that job involves chucking your colleagues off buildings and imprisoning political dissenters).

Helen’s reaction when she realises it’s John getting out of the car and not Heydrich is perfect. She sags against the frame, allows herself a moment of emotion, before straightening back up and opening the door, composed as her husband walks up the garden path. This, it would seem, is for the benefit of the driver, who discreetly withdraws. The moment he’s out of shot, John takes Helen in his arms and in they are unguarded. We only observe this couple having moments like this when they are sure no-one else is looking. This is a society of surveillance after all.

John runs his hand down Helen’s back, pulls his cheek to hers, and they luxuriate in being

reunited once more. He has one arm wrapped around her shoulders in a beautifully protective gesture, but she’s equal in the embrace as she’s wrapped an arm around his back. This suggests that they might have different roles in the family, but that they are definitely equal. She might defer to him in public, but in private they are very much two halves. The conversations in their home, in their bedroom, show what a source of mutual support to one another they are, and it only really starts to fall apart when they lose that honesty (the moment Helen keeps Juliana’s observation of Thomas’ condition from John, is when things start to go wrong between them).

He then pulls back to look at her, raises a hand to her cheek and looks her straight in the eye. There’s no passionate kiss, but the sense of passionate relief is palpable. He takes her hand and leads her back through the front door, where, once the door is closed, they talk. The conversation is laced with heaviness, with things that are left unsaid, and as they talk, there are reassuring physical gestures, a touch on the shoulder, a taking of a hand, until they embrace once again, as captured in the final mid shot. What I love about this interplay is that it feels so perfectly natural. Horsdal and Sewell convincingly express the nuances of a long married couple; the touches stem naturally from the talk, and flow seemingly effortlessly. I’m intrigued as to how much was spontaneous; how much they just went for it in the scene, as it all feels so unforced, unplotted.

The framing of this scene is perfect, too. There’s so much emphasis on light and shade here, and it’s obvious that the intention was to make the chiaroscuro reflect the struggle between the light and darkness of the Smiths’ lives. We know John Smith is a Nazi; we know Helen supports his work by backing him up at home and being the ‘Queen Bee’ of the Nazi Wives set, but somehow, framed in this doorway, the audience sees their fear, and their love, and that their allegiance to the Reich, while obviously a source of great benefit, is also a source of great stress. The shadows that run across Sewell and Horsdal’s faces and figures are quite deliberate; this is a world of shadowy morals, of horrific allegiances and terrible choices. While we may not exactly root for the Smiths, perhaps it is easier to see the complexities of them in scenes like this.

As I’ve continued to watch this show, this is the relationship I come back to, again and again, because it’s so perfectly drawn onscreen. There will be another blog post soon about their other series 2 key moments (without saying too much, the series 2 finale made me weep), but for now, I’ll leave it there.