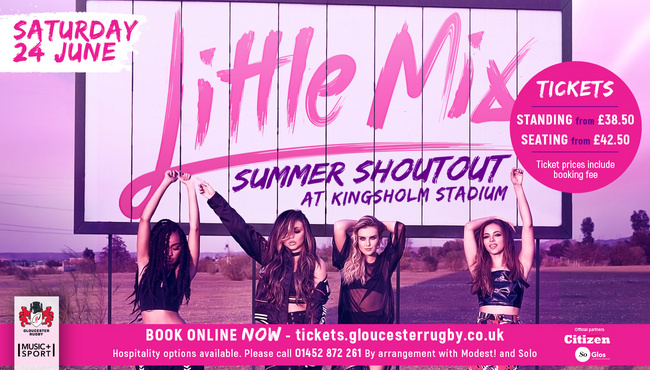 I need to get one thing straight immediately. When Matthew Carter quips in The Second Chance Tea Shop that his taste in music stopped evolving when Kim Wilde was better known for her singing than her gardening, I was basically referencing myself. I’m not really a ‘modern music’ kind of girl, especially when it comes to, er, pop music. I also don’t like reality TV talent shows. Well, I say that, but I do have a soft spot for Will Young (Pop Stars) and Lucie Jones (The X Factor), but that’s not because I’ve ever watched the shows; I Love Lucie for this song, and Will for this one!

Anyway, I digress. Last night I took Daughter #1 to see Little Mix at the Gloucester Rugby Club with some friends (her friends and my friends – that’s handy!). I know nothing about LM except for the song that is my guilty pleasure, ‘Black Magic’, and that they won some TV show or other, didn’t they? No, I’m not being facetious; I really don’t know!

I’m not sure what I was expecting. Oh, OK, actually, I do know what I was expecting; scantily clad girls shouting into their mikes, dressed in next to nothing, gyrating wildly in ways that I might find a touch inappropriate for my seven year old daughter. Now, let me just qualify this assumption with the fact that I had never seen them perform any song, ever, before last night, and my knowledge of them was supremely limited to that one song. I was guilty of that worst of sins; forming an opinion based on no knowledge or experience whatsoever; *cough* Daily Mail readers, I’m looking at you! 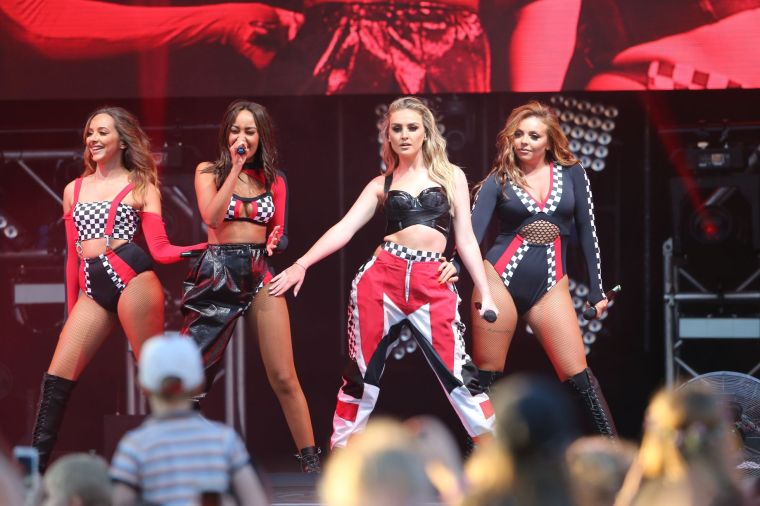 Well, I’m thoroughly ashamed of myself. I saw four supremely talented women performing last night. OK, so musically, it’s definitely pop – catchy tunes about boys, friends and lost love feature heavily. But, my goodness, they know how to deliver. Four strong voices rang out across the stadium, belting out lyrics with an assurance and musicality that showed they are already veteran performers. I loved ‘Black Magic’ (2nd song of the set) and the rest of the songs, which I didn’t know but were all delivered equally professionally and without a hint of knowing irony. The other song I knew, ‘Shout Out To My Ex,’ was their encore, and they also did it brilliantly.

They know their audience, too, which consisted last night of mainly women and girls. There were girls of all ages there, from a few weeks old to tweens, to teens, to twenty, thirty and forty somethings. And the show was pitched to be mindful of that broad spread of ages. While I’m not concerned about the raunchier aspects of any art (provided it’s pitched to the right crowd), I was a little curious as to how Little Mix would pitch their gig, given that the promotional material seemed so aimed at teens and young girls. I needn’t have worried; there was a lot of strut, a pinch of sass and little bit of sauce, but nothing I would have needed to explain to my seven year old. They wore their trademark (so I understand) Beyonce style leotards for a lot of it, but these were no more revealing than you’d see at the local pool (actually less so!) and left plenty to the imagination. Likewise, they danced skilfully and sassily, but not in a way that would make me raise an eyebrow in the company of my young daughter. In other words, they got it spot on.

I’m sure this isn’t news to those of you who know more about Little Mix than me, but to me, last night was a bit of a wakeup call that, no matter how I pride myself on not making assumptions, this time, I was really pleased to be surprised, and totally wrong to assume I knew about this group of very talented performers. I would definitely go and see them again, and, because I’m old, I would definitely compare them to The Spice Girls in terms of Girl Power. What a night!