Life has rather taken over for the past few weeks and I’ve not written much in this blog. However, I couldn’t let this week pass without making reference to the fact that my first novel, The Second Chance Tea Shop, is now on the shelves in Sainsbury’s supermarket stores nationwide.

When I got the email from my lovely editor a few weeks back, I squeaked until Bertie the Weimaraner thought I’d gone quite mad. Then I squeaked some more, pretty much until the rest of the family came home. Although e-book sales are where it’s definitely at in terms of numbers, and the digital version has been the driver of the book’s sales figures so far, being able to walk into a shop (and a major supermarket, no less), and see The Second Chance Tea Shop on the shelf, in the chart, is such a thrill. And the paperback is GORGEOUS! Pretty, pretty colours and an embossed front jacket mean I spent the day I received them through the post just looking and stroking it (oh, and that new book smell, of course!).

So how does it feel to have a book on the shelf in a shop? Pretty much like when the agents requested full manuscripts, offered representation, the publishers did the same, the book went up on Amazon, I got my first reviews…it’s tummy tinglingly exciting (even if some of the teenagers I teach are still resolutely unimpressed by it all!). It does still feel a bit unreal, though – like it’s happening to her, not me. My alter ego, the one with the tidier, more stylish house; the slimmer one; the one with the better wardrobe. I kind of have to remind myself that she is me (she still feels like a separate entity, at times).

Friends and family have been really kind, and snapped shelfies of the book in situ in Sainsbury’s, which feels amazing. I’m so grateful to everyone who’s taken the time to ping them over to me. I think I’ve reached the four corners of the country, now! One of the nicest was from an old school friend, who took a picture of it in the Sainsbury’s in the town where I grew up. It felt lovely to know a part of me was back there :).

Oh, and I also reached the Bestseller ranks on Amazon Australia a couple of weeks ago, which was hugely exciting. That little orange banner next to my book was such a coup!

There is something else I’m hoping to go public with in the next few weeks, but for now, I’ll leave it at that. Not bad for a summer holiday, really ;). 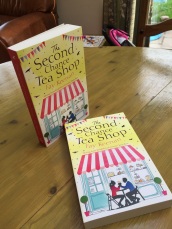 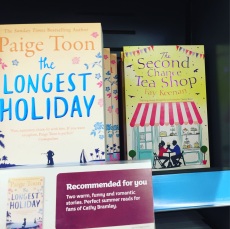