OK, I’ll admit it. I’m a sucker for a good notebook. I can’t walk past Paperchase without going in (and trying to contain the drool), and as for The Works…they have me at 20% off, every time. I’ve even managed to indoctrinate my two daughters into the Sisterhood of the Beautiful Notepad, and I’m pleased to report they’re doing rather well at it, too.

I’m also, sadly, a sucker for a well placed ad on Facebook. Dresses, shoes and stationery are my weaknesses, and I’m very likely to click through to a product if it’s in one those areas of er, interest. That was how I found out about the Daily Greatness Journal. One night after Christmas, an ad popped up and I clicked.

To be honest, I’m quite an easy sell. The book looked beautifully designed, with a soft cover and elegant cream pages. From what I could see on the website, its main selling point is the introduction of structure into your life, by way of a series of short, medium and long term goals. Given that I’ve got a book coming out soon, a second one to finish writing by mid year, two young children and a career as a secondary school English teacher, as well as a house that basically either needs renovating or knocking down, a large dog, a long term husband (or so he tells me when I try to get rid of him) and about three stone in weight to shed, structure is certainly something I aim for on a daily basis. The trouble is, as always, some days go better than others.

So, I thought, what do I have to lose (apart from forty quid on the journal)? Bank card in hand, and after the discovery of a handy 10% off code that brought the cost of the journal to £36, I awaited the book’s arrival. Yes, that seems a lot for a book, but as you will hopefully see, I feel it’s money well spent so far.

It arrived speedily, and, after stashing it away from the covetous eyes of my children (I like to feed their habit, of course, but this was one for me, and me alone), I left it in my bedside drawer for a week. To be fair, it was just after Christmas and I had loads to think about, and I knew that when I did eventually decide to crack the spine on it, I had to be ready. This was not going to be some flash-in-the-pan write-it-for-a-week-and-then-lose-interest journal experience. No. If I was going to do this, I was damned well going to commit.

A week or so later, I opened the drawer, took a deep breath and opened the cover. The book creaked satisfyingly; worth its weight in, er, money, even at this early stage. Now, I had done my homework; I knew that I couldn’t just dive in on page one and start writing. There’s a process to using this journal effectively, and that process is explained in the introductory pages of the book. There are basically eight steps to aspire to, and the idea is that you build up to them gradually. That suits me; if I build up gradually, I’ll have a better chance of maintaining these. OK, so the idea of a ‘Greatness Blueprint’ feels a little trans-Atlantic to this Brit, but I got on board and tried to think about the whole process holistically for as much as I could. I read through the introductory pages, took a few days to think and digest and then started filling in the blueprints etc. I did the groundwork first, and then left the first entry for the next day, so I wasn’t overwhelmed by the process; it is quite deep, what you’re asked to consider, and can bring up some buried things!

So, what works? Well, I’ve been writing in the journal for five weeks now, so I’ve completed the 90-day initial plan, four weekly reviews and one monthly review. And I have to say, it’s keeping me on target. Although I can live without some of the more yogic mantra stuff, actually, the routine it instills in me really works.

So does it work? Well, in my 90-day plan, I committed to several things, and now I’m just over a third of the way through I can say that I appear to be on the right path with most of them. I’m certainly focussing on being calmer, which is a big one for me, and in more practical terms, I’ve achieved the writing goals so far and the weight loss ones. I’ve put 34k of book 2 in order,  my house is generally better organised and I’ve lost 11lb in five weeks. I think that some of the sections are a little superfluous, or may be aimed at people who actually have a little more time to engage on a deeper level with every aspect of their life and psyche, but for me, it’s certainly providing the structure I’ve been craving, and it has been effective in allowing me to become more effective, and achieve if not greatness, then positivity in most aspects of my days. And actually, on the two mornings I’ve forgotten to do the breathing and the goal setting, things haven’t exactly gone to plan during the day, so on some deep level it obviously works to prepare your mindset.

So, all in all, I’d say that the DGJ has been a success so far, and well worth the thirty six quid. Perhaps some of that is down to the high price point of the journal; if you pay that much for a notebook, it needs to be worth it, and a lot of whether or not it’s worth it is, in the end, down to the writer of the journal.  I’ll report  back in 90 days when I’ve done the quarterly review, but I have a feeling I’ll still be positive about the experience. So, if you fancy a go at it, I’ve got a 5% discount code that you can apply if you click the pic below. Go on..give it a go. You never know what you might achieve! 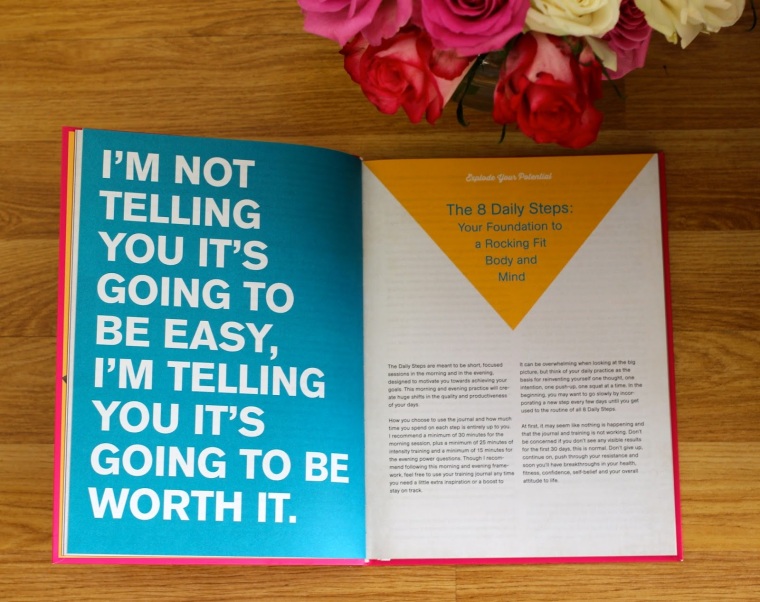